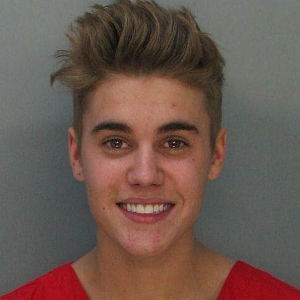 Bieber possessed? Not likely. More like a kid just acting out.
I’m sure many of you have been seeing videos all over Facebook and YouTube of Justin Bieber’s court hearing. Supposedly, you see his eyes change into something demonic, almost like a reptile.  I’ve had friends sending me several different videos asking me my opinion on the matter, because it’s a huge thought that musicians will sell their soul to the devil for money and fame.
I’ve reviewed the original video, along with videos that have been slowed down and magnified to show what happens to his eyes.  I also looked up videos of this happening to him during interviews.  It’s funny because I’ve seen so many of them that I’ve dreamt about it and had his eyes appear all “crazy” in my sleep! I really think it was because I’d watched them over and over until I repeated it in my dreams.
I did meditate on it and felt that something negative was trying to push through a portal into my home.  Do I think Justin sold his soul to the devil? NO! He may be may be doing negative things, and it’s possible that there is a negative entity feeding off of him. However, he’s just a kid who made it “big” way too fast and doesn’t know how to handle all the stress. He’s not able to live his life like everyone else, and is acting out!
I do feel that these videos and rumors can cause fear in some people, allowing a negative entity into their own environments (it did freak me out after my dream). But otherwise, if you ask me, it’s just a poor video!