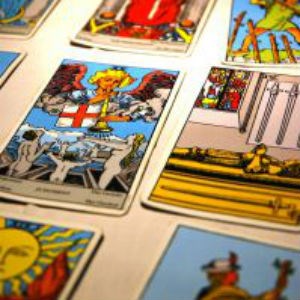 It's helpful to know the card meanings prior to your tarot reading.
The tarot is a beautiful set of cards that tell a story by using archetypal energies.  They speak to us and the situations we find ourselves in.  There are 78 cards in the entire tarot deck.  There are 3 main groups of cards: 22 Major Arcana or Trump Cards, 16 Royal Court Cards, and 56 Minor Arcana or Pip Cards.  There are also 4 suits in the tarot: Cups, Wands, Pentacles, and Swords.  These 4 suit cards correspond to the four elements in Western Astrology.  Cups to Water, Wands to Fire, Pentacles to Earth, and Swords to Air.  However, I will speak about the Royal Court Cards in this article.
As discussed above, there are 16 Royal Court Cards.  They are broken down into 4 groups; which are the Kings, Queens, Knights, and Pages.   The Royal Court Cards generally represent real people in our lives with real personality traits.  They can represent someone from any level in your life and can speak to the past, present or future  By the way, they can also represent you.  Finally, the Royal Court Cards can change their characteristics according to the nature of the question and the questioner.

Now, since I am a gentleman, I will start with the Queens of the deck first.  The Queens have a mature feminine energy, and they have just as much command, authority, and power as the Kings.  In some cases, they are more assertive and quicker to action than their male counterparts.  This is due to the cardinal or active nature given to the Queens.  Just like the female lions of the jungle who are fierce hunters that provide the food for the pride.  The Queens are about getting things done.  Intuition and attraction are strong in the Queens.
The Kings are the mature masculine energy in the deck.  They represent staying or holding power.  They have a more reserved or contained kind of power and command.  They move things more with their presence and not so much by their actions.  The Kings correspond to the fixed energy in astrology which sustain and keep things going over the long haul.  They are very determined and have the power to see a project or situation to a successful end.

The children of the Royal Court come next, starting with the Page.  Pages are the youthful feminine energy in the deck.  They usually have some news to give and are known as the sensitive and creative messengers of the tarot.  Pages generally represent people who are younger than the person receiving the reading.  They can help us through transitions in our lives, and offer kind and loving service through these transitions.   Surprisingly, the Pages show us a different or unorthodox way of looking at things.

Last, but certainly not least, are the hard-charging Knights.  They represent the exuberance and passion of a young teenager.  With their chest stuck out, they are filled with confidence.  They are always ready to take action.  They show people who initiate projects and are eager to get things started.  Sometimes their decisions are not always thought out, with the exception of maybe the Knight of Pentacles.  The Knights can also be forceful and out to prove themselves.  They often want to take the power instead of becoming the power like their father, the King.