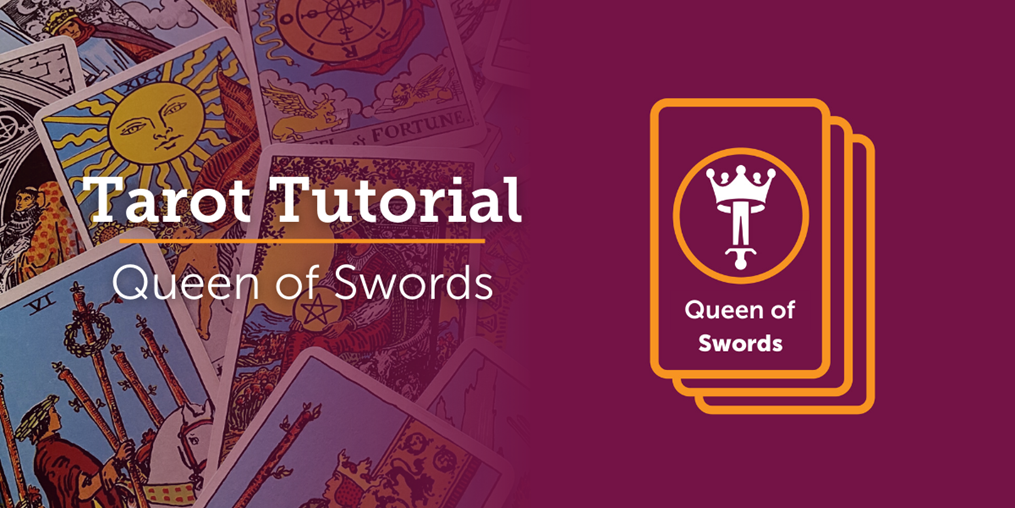 Discover the meaning of the Queen of Swords

You never have to guess where you stand with someone showing up with Queen of Swords energy, and they will always tell you. This queen is very clever and quick with words, making her hella fun to listen to—as long as she isn’t using her cutting wit on you! She can be stone cold when she has to be and will not blink if she has to use her gifts to defend herself or the people she loves. The Queen of Swords is linked to Air signs, so she can represent any adult born under Gemini, Libra, or Aquarius.

Remember, court cards don’t always refer to a specific gender or even to one particular person. Sometimes they show up as a nudge from the Universe when it’s time to embody aspects of the royal in question. All the Queens represent a mature and inward focus, and the suit of swords is tied strongly to words, curiosity, and intellect. Her brilliance might be just what is needed to cut through murky situations to bring some clarity.

The Queen of Swords in a Love Reading

One thing’s for sure—there won’t be any mixed signals when the Queen of Swords shows up in a love reading. This tarot royal has spent the time getting to know her own mind, what she likes, and what she dislikes. She will keep things 100% in a relationship and expect the same from you. This relationship might not have the smoothest start. There could well be an enemies-to-lovers vibe going on here, or at least something where the attraction isn’t instant. Once you get to know each other better and your relationship gets stronger, you may end up being one of those couples who finish each other’s sentences.

If the Queen of Swords turns up in a position representing you, you need to check in with your head to see if you are all in on where your relationship is going. You might be feeling the love, but there could be some real and practical issues you have yet to consider (like different ideas about your future together or differences in backgrounds). That doesn’t mean your relationship is doomed or in trouble. Far from it. But pretending something isn’t going to be a problem when you know it might be in the back of your mind isn’t good for the long-term health of your relationship. It’s time to tackle it head-on so you can deal with it in a way that keeps you and your boo going strong.

The Queen of Swords reversed in a love reading is a big red flag. Her majesty has a rep for being the saltiest royal when unhappy and can be downright mean with her words. That meanness is usually a defense mechanism for deeper ongoing issues. But no one should get used to sarcasm and cutting words being the default way to communicate. One or both of you needs to stop the cycle and deal with the -ish that’s happening. And if you can’t do that, you may need to walk away for the sake of your mental health and peace of mind.

The Queen of Swords in a Future Reading

The Queen of Swords in a future reading might be shining a light on where honesty is needed. Her majesty is telling you it’s time to keep things 100%. The surrounding cards can give you a clue which aspect of your life needs her energy explicitly, but it’s not a bad idea to look at your life in general and embrace a more logic-centered approach to it. You may have an “ah-ha!” moment where the solution to a long-standing problem becomes clear. This doesn’t necessarily mean you’ll love the answer, but following a logical course will mean less heartbreak in the end.

The Queen of Swords can also indicate that someone born under the sign of Gemini, Libra, or Aquarius might be taking on a more prominent role in your life. It could also refer to someone who has the traits of this Queen. They aren’t Willy Wonka, so don’t expect them to candy-coat things. But this person is sharp, wise, and willing to pour ALL the tea. It’s a good idea to take whatever they have to say seriously. They have a level of insight you might be missing on your own. Still, be sure to engage your brain when making a final decision.

If the Queen of Swords comes up reversed in a future reading, it’s a warning that someone refuses to see what is logically right in front of them. The person in question might be doing Olympic gold medalist levels of mental gymnastics to avoid the truth. Getting through to them will not be easy. Also, make sure that you aren’t the one ndodging the truth, Sis. Yeah, some things are harder to admit to than others. Just take the first step in being honest with yourself. Once you can do that, the way forward will be much clearer.

The Queen of Swords in a Career Reading

While there’s a fair bit of overlap between the Queen and the King of Swords in a career reading, remember that the Queen’s focus is usually more inward. So while we’re still looking at a high-tech or communication-focused work environment (or a job that requires a lot of brainpower and problem solving), there’s a lot more opportunity for independent projects over collaborative ones. This means less micromanaging (yas!) but more self-discipline (yay?). Be honest with yourself—how self-organized and disciplined are you really? If you do better with a job or project that allows for more social interaction and has someone else setting the goals and/or timelines, maybe give it a pass.

The Queen of Swords can also refer to a co-worker or boss born under the sign of Gemini, Libra, or Aquarius (or someone with the Queen’s sharp analytical skills) taking on a more important role in your workplace. This person often has a lot of deep knowledge, but they may be very picky about who they take into their confidence. Don’t expect to be office BFFs without proving yourself in some way. But once you’ve got their respect, they will be a strong ally in achieving your long-term career goals—including ruthlessly keeping things 100% about anything and everything you need to be aware of—so you don’t get stuck in a sub-optimal sitch.

Suppose the Queen of Swords comes up reversed in a career reading. In that case, clear communication will NOT be one of the strengths of this job environment. Chances are also high that the corporate culture may be very harsh, with all feedback coming in as criticism or even just downright insults. Maybe some people can thrive in situations like that, but we can’t think of too many who could - just saying. If the Queen of Swords reversed is representing you in the reading, it’s a warning that you are being too critical. Does this situation need bluntness, or will you get better results from a gentler approach? Yes, even if you are 100% on point with your assessment, you will still need to win people over to your side. Do what you can to listen to others, then you’ll know how to sell your ideas to them better.

Get a Tarot Reading

Still wondering what the presence of this powerful royal points to in a tarot reading? We gotchu! Our Tarot Experts have the skills to go deep when you need answers about love, career, or anything else weighing on your mind. See how their insight can have you moving in the right direction to manifest the life of your dreams.