Do you ever feel like going into the Witness Protection Program to escape your to-do list? Then you've got an idea of the vibe of the Ten of Wands.

The imagery for this card is super-consistent no matter which deck you're looking at. And all of them will have the same meaning, which can be summed up in a Ru-Paul quote: "Gurl, you better WERK!" This card will often pop up when life is feeling like a lot. It's also a warning that you are getting really low on emotional/ physical/ mental spoons. You have got to put something down sooner or later for your own good. Look, we all want to face life with a Marvel superhero's confidence and general badassery. But sometimes, there's too much surface pressure to handle, and it isn't wrong to respect your limits. 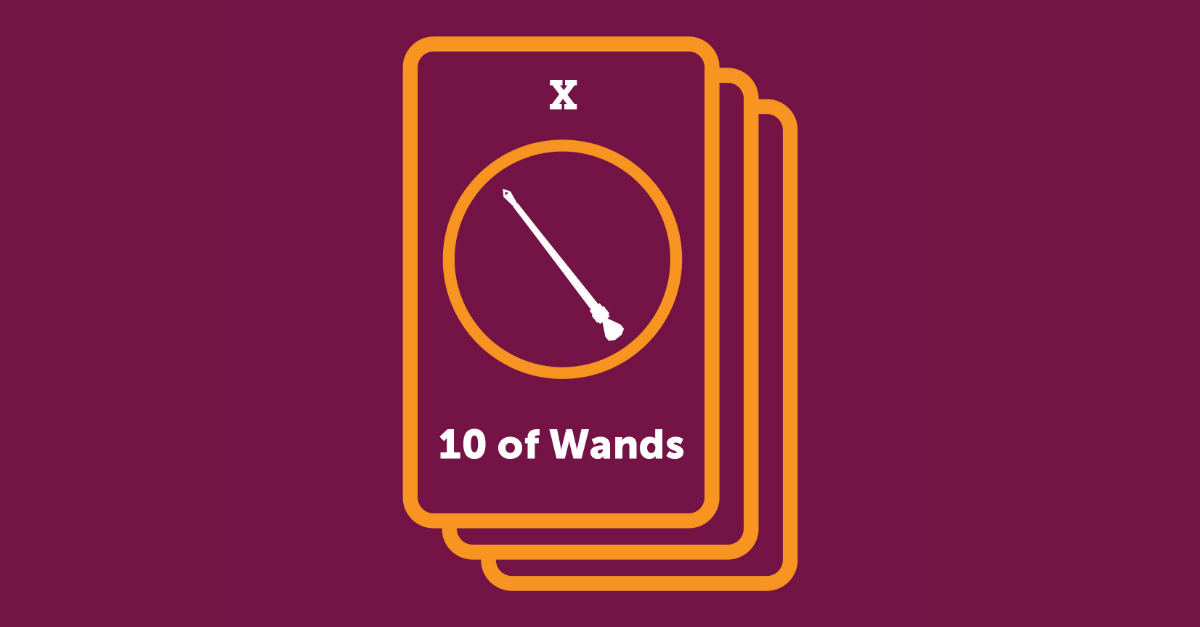 Meaning of the Ten of Wands in a Love Reading

Without the candy-coating skills of Willy Wonka, there's no gentler way to put this. Be prepared to work if you pulled the Ten of Pentacles in a love reading. Real love is always going to require real work anyway. If you want it to last, that is. Depending on what the surrounding cards are saying, you may be going through some necessary (and little draining) work on your relationship. Every relationship has moments like this, though it is up to you to decide if it's worth it.

If you were wondering about new love in general in your life, the Ten of Wands says that you might have to take a clear-eyed look about what you are capable of taking on right now. It might be better to do some work on yourself at this moment than jump into something new. If you were asking about your chances with a specific person, seeing the ten of wands in a love reading is a red flag. You can expect to do more than your share of the work in this relationship, whether it's housework or emotional labor. Is this person really worth that kind of effort? We don't know about you, but unless there's something really compelling going on, it's best to leave the fixer-uppers to TLC and not invest time and emotions in something that will not serve you.

If the Ten of Wands came up reversed in a love reading, you can still expect to do some heavy lifting, but you also need to ask yourself: Are you taking on a heavy emotional load because of untested assumptions you've made? Have you tried talking with your partner about sharing the load or responsibilities? You may be pleasantly surprised by how much they'd be willing to step up if you actually spoke to them! Sis, if this love is worth it to you, then it's worth having a conversation with your boo about things.

Meaning of the Ten of Wands in a Future Reading

Sometimes the path ahead of us is easy. And sometimes, the Universe has other ideas. When the Ten of Wands shows up in a future reading, expect that whatever is coming up next will involve a ton of effort. You may have overpromised, only to regret it later once you see the amount of work involved. It could also be a warning about something becoming a time or energy suck. Be honest with yourself if the work is worth the reward. The surrounding cards can also let you know if this is the time to persist or cut your losses.

Also, remember, as your mom might have told you once, you aren't the only person on earth! The Ten of Wands can act as a wake-up call to delegate what you can to others. It might feel humbling, and not everyone will answer the call for help. But you have a finite amount of energy, and it just isn't possible to do all the things, especially right now. You need to get real about your limits and let some things go.

If you see the Ten of Wands show up reversed in a reading, then expect a break (even if it's just an itty bitty one) in the middle of a sea of work. Others might notice you struggling and will offer to share the load. Take them up on it. You might get an unexpected break to take an afternoon of self-care. Get your spa on, girl! You aren't selfish or irresponsible for needing to get your batteries recharged. You might find the energy you get from the break is exactly what you need to push your big projects over the finish line.

Meaning of Ten of Wands in a Career Reading

If you pulled the Ten of Wands in a Career reading, do not expect to be able to just phone in at the job or for any work-related project ahead of you. Your full presence, and then some, is going to be required. Nothing about it will be easy, and you might find you have no choice but to wear multiple hats to pull things off well. Whether this is about a new job you've been looking at or a new project you've been thinking about taking on, you have to ask yourself if it's worth it. The surrounding cards can help offer clues about that, but ultimately deciding what to take on lies with you.

The Ten of Wands can also appear when your deck calls you out for being a workaholic. Yeah, we get it. Hustle is super important in this day and age, but so is your emotional and mental health. This card can come up when you are right on the edge of burn-out and sometimes just past that point. Even the most driven, ambitious, and well-organized people CAN'T do it all. Do not take on more than is good for you. This is also a wake-up call to set firmer boundaries with your co-workers and/or bosses and turn down requests for just one more thing until you finish what's on your plate.

If the Ten of Wands shows up reversed in a career reading, it's a sign to call in your team. There are folks ready and able to help you with the task ahead. The resources are there for the asking. But it is 100% up to you to ask. There will still be plenty for you to do (unfortunately) on the job or project. Work will survive if you take a break. And more importantly, so will you.

Get Connected to a Tarot Reader

Still need help figuring out how to carry all the weight of the Ten of Wands without losing your sanity? We gotchu! Our tarot experts have the skills to go deep when you need answers about love, career, or anything else that's been weighing on your mind. See how their insight can have you moving in the right direction to manifest the life of your dreams.