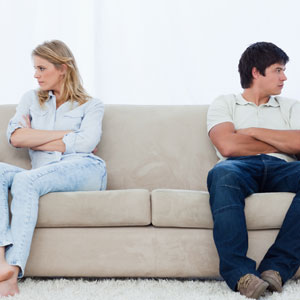 He isn't ready for the next step in the relationship? Find out why, and if it's worth trying.

Have you been in a relationship for a while, and he simply isn't interested in moving forward with it? There are a few primary reasons why he just won't make that commitment. See which one of these might be holding your man back from commitment.

Unfortunately, some men find themselves in the middle of a relationship and then realize the ex was what he really wanted after all. It has nothing to do with you, so there's no need to feel bad about yourself. He probably won't admit this, but if you feel this is the reason, it's probably time to say goodbye.

A bad relationship can lead to problems trusting and committing later on. Often, this problem can be fixed if the couple is able to be open and honest and move on. Counseling is also helpful. See if your man would agree to consult a love psychic.


3. Somebody Else is Catching His Eye

This is probably the most devastating reason on the list, but don't worry, because you're better finding out before he agrees to commit, rather than afterward. You deserve much more than a cheating man with wandering eyes.

This might actually be the easiest reason for women to deal with. It's not somebody in his past, or somebody he hopes for his future. It's just that he's where he wants to be for now, and that doesn't mean you aren't special. If you're willing to accept this, that's okay, but if not, then it's time to move on.

Many men have very set goals and dreams for how they want their lives to play out. He may be dating now, with no intention of getting serious until his education, career goals, and financial situation are well settled. Again, you can wait if you're cool with this, but there's no foul in moving on either. Get a psychic reading if you're unsure what's best.

Not all guys are even working toward something for the future. They enjoy the thrill of meeting someone, those first few blissful months of dating, and then they're done and ready to do it again with someone else. If this is your guy, just gather your spare toothbrush from his apartment and call it quits. You deserve better.

Sometimes women in relationships with men who drag their feet start getting pushy. This does the exact opposite of making him want to make a more serious commitment. If you can't stand it anymore, move on. Otherwise, let him take his time and turn off the pressure.


8. He Just Doesn't Want to Take on the Responsibility

This guy is a close relative of "just in it for fun." He likes your companionship, and doesn't want to break things off. Still, he's not ready for a situation where he's expected to keep up his share of things. Don't waste your time, instead let him play around with someone else's feelings and he'll likely end up alone.

Many men have a clear picture of becoming the company president or a big honcho. These guys are looking for the woman who'll look good on his arm at charity events and awards presentations. If you think you're just a placeholder until his Jacqueline Kennedy comes along, find someone who values you for who you are.


Which one of these is holding your guy back?