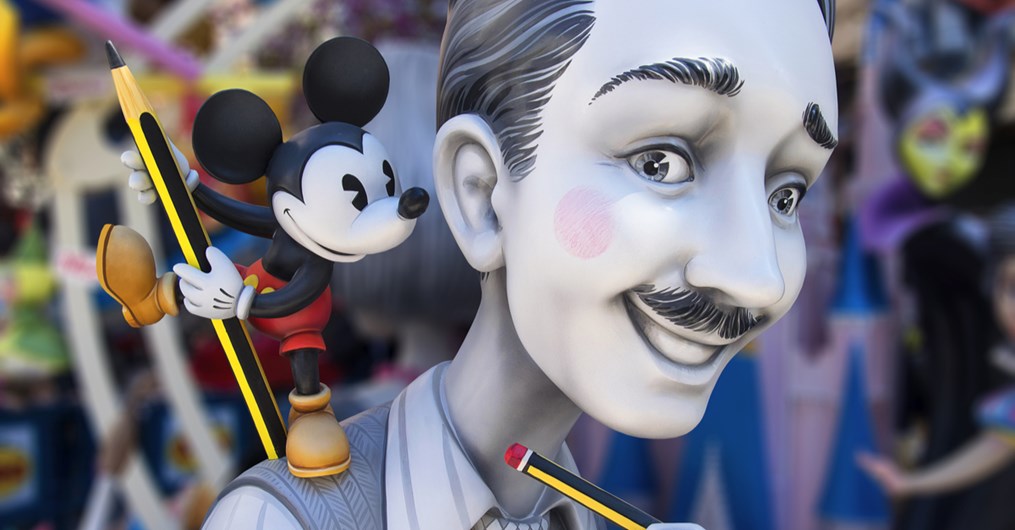 The man behind the mouse!

Cash is king, and so is solid financial advice. No matter your age, income, or bankroll status, we all could benefit from some guidance when it comes to our money. Whether you're investing in furthering your education, still paying off student loans, or cutting back on those $12 salads (guilty!), I'll discuss one timeless budgeting tip a week from a different historical figure who had their $%*+ together! This week, let's hear it for the man who created the "Happiest Place on Earth," Walt Disney (standing ovation).

Walt Disney has gotta' be one of the most impressive success stories of all time – hello, DISNEY WORLD! Walt was just like any other kid growing up. There were no silver spoons or trust funds. He was just a farm boy in Missouri who loved drawing cartoon pictures of his neighbor's horse. Walt's family later moved to Chicago, where he started taking classes at the Chicago Art Institute and illustrated for the school paper. In his very early career, Walt began his own cartoon company called Laugh-O-Gram, but his business didn't make enough money, forcing him to declare bankruptcy.

But this financial failure did not stop Disney from chasing his dreams! He moved to Hollywood and created the first animation with sound, Steamboat Willie, starring the now beloved Mickey and Minnie Mouse. This major accomplishment in Walt's career was just the beginning of his lasting success and the path that led to the opening of Disney theme parks. Talk about NEVER giving up.

"The way to get started is to quit talking and begin doing." – Walt Disney

Walt Disney believed that success was achieved by making a plan and taking the steps to see it through. In other words, stop sleeping on your dreams! Think about how many missed opportunities we've experienced in our lives from procrastinating. Let’s face it, the voice in our heads can be our own worst enemy and to be successful in money, and life in general, we need to stop overthinking and start doing. Easier said than done? Here's my take on it:

#1 Write Down Your Goals

As I've gotten older, I’ve realized that New Year's Resolutions shouldn't be an afterthought. Resolutions allow us to start something new and make strides to reach a higher level of success. For me, I keep a journal where I jot down my goals for the year and plans/ideas to get me there. And while some destinations may be more long-term and carry over from year to year (like making six-figures!) my journal holds me accountable for taking action. You can journal any time of the year and don't have to procrastinate on this simple exercise until 2021 – got ya! Today is a great day to begin.

I've found that talking to people who inspire, motivate, and challenge me has helped me further my career and financial wellbeing. For instance, when I need savings and 401K advice from a money expert, I talk to my father. At work, I have a go-to colleague who provides me feedback which helps me finetune my craft. And when I need to see things more clearly, I talk to an intuitive Psychic on the regular. Getting support and perspective from people you trust can help you overcome roadblocks and spark inner growth.

Walt Disney showed us that you gotta' get back up and try again no matter how many times you fall. Even if your dreams seem far out of reach, you're empowered to make life happen. If you're sick and tired of your job and want to switch career paths, invest in yourself and your education. If you're tired of living paycheck to paycheck, start practicing frugality and saving techniques. You're capable of anything you put your mind to, and sometimes failure is our greatest teacher.

Are you inspired? I hope so! Walt Disney reached his profound level of success by "doing" and never giving up. If you're ready to take control of your future, talk to a Psychic about it! A Psychic can help you determine a POA (plan of action) and next steps towards greater personal success. Until then, keep up the hustle and I'll catch you next week for another issue of Budget Tips from Beyond.

This article is part three of a series. View additional articles in this series by going here!

“If you’re feeling inspired, I recommend chatting with a Psychic who specializes in this area of expertise. And remember, YOU are smart, strong, and capable of anything you set your mind to!” – Your PathForward Blogger Samantha
Discover: Budget Tips from Beyond, Career, PathForward Blogger, Spirits